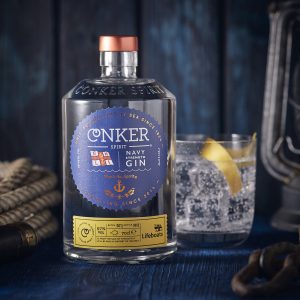 The sea formed a huge part of my childhood, and so did the RNLI’s iconic orange lifeboats. I used to watch in awe as our local Mudeford lifeboat launched bravely into the harbour, the white water crashing over the bow as the lifeboatmen and women stormed out into the ocean. With their HQ only a stone’s throw away in Poole, the heroic charity always felt very close to home.

So when I launched Conker back in 2014, I knew I wanted to support them.

I approached them in 2017. As a fledgling gin brand, I wasn’t expecting them to fall over themselves, but, to my utter surprise and sheer joy, they were keen! Obviously the lure of the bigger gin brands couldn’t trump Conker’s genuine attachment to, and experience of living and working by the water.

As a completely independent charity, the RNLI get no government funding – they rely solely on donations. So we wanted the monies we raised in support of the RNLI to be a tangible and significant amount, not just an obscure % of profits that no one understands. Instead, we decided to donate a firm £5 from every 70cl Bottle, and £2.50 from every 35cl bottle sold of our RNLI Navy Strength Gin.

We wanted our contribution to go beyond monetary and into the realms of public awareness. So we use our own social reach to communicate their incredibly important safety at sea messaging, raise their profile, and ultimately inspire others to support and donate.

Who would have thought that now, almost 3 years on, we’d have hit the impressive milestone of raising tens of thousands of pounds so far!

We’re incredibly proud of what we’ve achieved for the RNLI, and we know that we couldn’t have done it without the help of our loyal customers. Your love of our RNLI Navy Strength Gin has helped this amazing charity continue to help save over 143,100 lives often in the most perilous and treacherous seas of the United Kingdom and Ireland, since 1824.